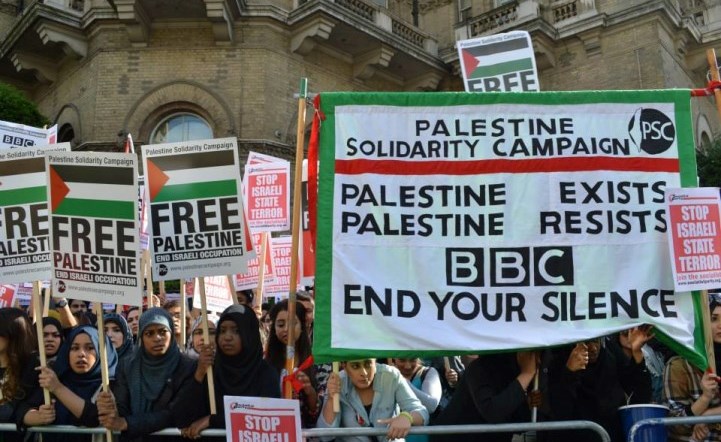 We, students of the BDS campaign, have refused permission for Lion TV to film us on behalf of BBC for Manchester’s Israeli Apartheid Week (IAW) due to their attempts to incorporate us into a documentary that is not about Israel’s military occupation of Palestine, not about the ethnic cleansing of the Palestinian people, but specifically for their BBC documentary on 70 years since the creation of Israel.

Despite us declining to be filmed or having any association with the documentary, the producers have persisted in contacting and deceiving our Pro-Palestine allies in an attempt to convince us to partake in a documentary which we believe is searching for a tokenistic representation of Palestinians and BDS student activists, in order to be able to claim their documentary has “balance”. Yet it is clear that the entire premise of the documentary has no balance when the oppressor is placed at the heart of the film and the oppressed – the Palestinians are merely a sideshow. Many of the members of the Palestinian BDS society in Manchester are not even allowed to go to their homeland in Palestine because of the discriminatory policies of the Israeli government.

This documentary is described as a two-part documentary where British Jews explore their religious identity to the state of Israel. To target our Israeli Apartheid week for a documentary on this subject is a massive insult to Palestinians who have suffered, and continue to suffer under Israeli military occupation, the siege and slaughter of civilians in Gaza and the ongoing ethnic cleansing of the indigenous population of Palestine.

So far since the filming has begun, we have learned that the producers have filmed Pro-Israel events across the country which culturally appropriate Palestinian culture, and use it as a weapon to normalise Israel’s war crimes against them.

The producers have contacted and encouraged Pro-Israel students at the University of Manchester to undertake events during our Israeli Apartheid Week such as a planned stall flying the Israeli flag whilst giving out falafel which they claim to be from Israel when evidently it is of Arab heritage. What’s more, the filming for the documentary had already begun on our campus much earlier. On February 7th, the BBC were seen filming a similar stall with an Israeli flag, where Pro-Israel students were giving out Moroccan falafel and claiming it as Israeli.

Not only has this taken place on our campus in Manchester, the film-makers are helping to perpetuate cultural appropriation across the country. For the documentary, they have filmed an ‘Israeli’ hummus festival, co-organised by UJIA, a group which co-actively works with the Israeli embassy, which occurred in Leeds. The premise of this festival was not only to propagate Israeli propaganda, but to normalise the erasure of Palestinian culture which is a political tactic of the Israeli government to aid the physical erasure of the Palestinian people.

The filmmakers are actively magnifying Israeli propaganda and attempting to demean Israeli Apartheid Week. They are working with the people that support the discriminatory system that Israeli Apartheid week is fighting against. This week is dedicated to fighting for Palestinians to have the basic freedoms that every human deserves, denied to them by Israel for coming up to 70 years. It raises awareness of Israel’s well-documented war crimes and furthers the movement for the non-violent tactic of Boycott, Divestment and Sanctions against the Israeli state until they comply with international law and the basic principles of human rights.

To cover Israeli Apartheid week with the main thrust of the documentary on the 70 year anniversary of Israel’s creation, is yet another example of the BBC’s diminishing of the 70 years of horror Palestinians have faced since the ethnic cleansing of Palestine in 1948. “The Nakba”, which is on record as being pre-meditated by all of the main architects of the Israeli state, was Israel’s violent expulsion of 800,000 Palestinians from their homes – to where the vast majority were never allowed to return. The focus on Israel’s creation is an act of Nakba denial, which is a denial of one of the gravest international crimes in the post-war era and a despicable slur against the Palestinian people.

Our campaign is focused solely on promoting Palestinian human rights and we refuse to participate in a documentary that we believe will only help sustain Israel’s apartheid regime against the Palestinian population at every point of their lives.

We strongly recommend every supporter of the Palestinian justice movement to not participate in this documentary, which has to date perpetuated Israeli propaganda and deceived our allies in an attempt to provide tokenistic balance to what is yet another BBC whitewashing of Israel’s ongoing crimes against the Palestinians.

View all posts by bdsuom